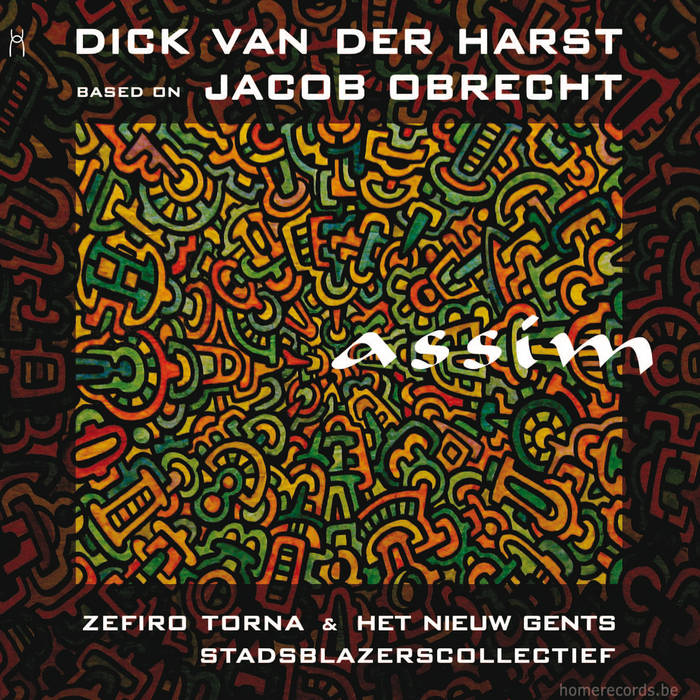 Dick Van der Harst composed “Assim”, a composition inspired by the polyphonic way of writing of Ghent born composer Jacob Obrecht (15th century). As no other, he understood the art of integrating in a most natural way highly complicated composition methods in his music.

Contemporary wind instrument sounds and Indonesian gamelan music spice up the musical argumentation of “Assim”. The idea of linking the gamelan tradition only arose in the later stages of the creation process. It was through his father, who was born near Bandung (Indonesia) in 1927, that Dick Van der Harst got acquainted with the gamelan tradition.

For this album, Dick Van der Harst is playing with two bands: Zefiro Torna and the Nieuw Gents Stadsblazerscollectief.

Zefiro Torna consists of Els Van Laethem, Cécile Kempenaers (vocals), Liam Fennelly (viola da gamba, viol), and Jurgen De Bruyn (lute, guitar and artistic direction). If the programme requires it, the ensemble is joined by excellent vocalists and instrumentalists from Belgium, the Netherlands, France, Italy and Slovakia. This way, they can count on the Slovak mezzo soprano Petra Noskaiiovà for Assim. Zefiro Torna brings the cultural heritage to life in a unique fashion, departing from a deep respect for the past. Authenticity is combined with creativity.

The Nieuw Gents Stadsblazerscollectief was founded by Dick Van der Harst at his appointment as city composer of Ghent in 2006. Apart from the composer, the ensemble consists of four other musicians : the clarinet players Jean-Philippe Poncin and Kurt Budé, the percussionist Wim Konink and Michiel Weidner on cymablon.